There are two meetings in the near future, the Crudwell Neighbourhood Plan invites residents to come along and find out about how the project is progressing;  there is an information exhibition about proposals at Ridgway Farm. 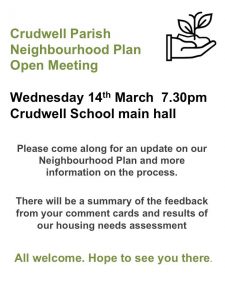 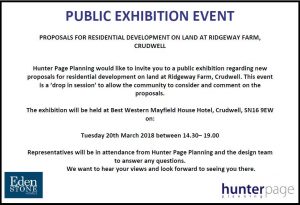 We are having a parish clean-up on

and would love for you to come and

muck in for a few hours.

It is a 10am start, meet at Crudwell Village Hall car park , and if you can help until lunch time (12.00 noon) that will be great!

All welcome, you may wish to bring your own protective gloves if you have them to hand!

Police and Crime Commissioner for Wiltshire and Swindon

I wanted to inform you about the launch of my consultation on the policing precept for 2018/19. I would be grateful if you could share this and make residents aware of opportunities for consultation. The details are set out below or you can access a video of me outlining the proposals at https://youtu.be/lsKkPmUd1Nc

The policing precept consultation which launches today (2/1/2018) is looking for the views of Wiltshire residents on the proposed increase of £12 a year.

Currently the average band D household contributes £14.19 per month to local policing, but if residents back the proposal then this would rise to £15.19 per month.

As a Force, Wiltshire Police has seen the second highest increase in demand across the country in the last year yet the funding we receive from central government doesn’t recognise the increasing pressures our service is under.

In fact we receive the fourth lowest funding per head of population in England and Wales.

Since 2010, Wiltshire Police has received £19 million less but have been responding to more crimes and supporting more members of the public year on year.

Whilst we live in an incredibly safe county, there’s only so far the budget will stretch and we’re streamlining our services to ensure they’re as efficient as possible at the same time as keeping the public safe, but we are feeling the squeeze more than ever. Without this increase Wiltshire Police will have to look at further reductions in officers and staff to close a budget gap of around £3m.

That’s why I am asking whether residents in Wiltshire and Swindon would be prepared to pay an extra £1 a month to help bridge this gap.

This increase will mean that I can protect frontline services from further reductions and maintain the current level of service.

The consultation which runs from 2nd January 2018 to midday 31st January 2018 wants to hear your views on the proposed increase.

For more information on how to share your views please visit www.wiltshire-pcc.gov.uk, you can also email pcc@wiltshire.pcc.pnn.gov.uk or use #AskAngusPCC on social media.

Police and Crime Commissioner for Wiltshire and Swindon

We are pleased to announce Simon Grainger was Co-Opted as Councillor at the January 2018 Parish Council meeting.  We look forward to working with Cllr Grainger, this brings us to our full complement of 9 Parish Councillors.

Are any residents or community groups interested in receiving a Barberry bush?

To help the species thrive, the Crudwell area has been selected to receive Barberry bushes.  The plants like…  areas that are not waterlogged too much in the winter and partial shade.  In the past Barberry was a persecuted plant as it was found to be an intermediary host for a wheat rust fungus.  This is not currently a concern as rust-resistant crop varieties were developed.  However, we do not know if this situation will change in the future with climate change and for that reason we are not planting closer than 20 metres away from cereal crops.

We are looking for suitable locations in Crudwell, towards Hankerton, Long Newnton and Ashley.  The bushes can over time grow to about 7 foot tall but are slow-growing and can be pruned back in late autumn.  They typically fit well in hedgerows and have attractive berries that are great for birds and small mammals, but also have spines!  School gardens, churchyards and village halls with gardens are all good locations too.  More info below:-

We are pleased to announce Jonathan Capper was Co-Opted as Councillor at the October Parish Council meeting.  We currently have 8 Councillors and one vacancy – if you would like further information on joining the Parish Council, contact Lisa (clerk) :-

Attached below is the Crudwell Parish Council response in document form, or read in full below.

If you would like to register your comments about the proposed housing allocations, you can do so, the deadline is:  5PM ON FRIDAY 22ND SEPT 2017

The simplest way to make a representation is via email to  spatialplanningpolicy@wiltshire.gov.uk , but you can also write directly to:

It is important to differentiate between the village of Crudwell and the designated area for the Neighbourhood plan which is the Parish. The Parish Council believes the village has been described as Large because it has two Hotels, two Pubs, a large lorry haulage yard, a car sales and servicing facility and a School. Many farms surround the Village farms. The village has about 250 dwellings

Crudwell Parish Council has in the past supported the introduction of new build housing projects as a means of sustaining the viability of the village and will continue to do so in the future. With the introduction of small estates every few years the character of the village has not been spoilt and the Conservation area has not been threatened. The centre of the village has been developed from the A429  and the rural feel of the village has been maintained. Ridgeway Farm had been submitted to Wiltshire Council back in 2014.  That application drew much local opposition from local people, principally on the grounds of the scale of the development, it being outside the designated red line settlement boundary, and its likely impact on the local infrastructure, specifically: the likely increased traffic on Tetbury Lane; impacts on already overburdened drainage and sewerage systems and oversubscription of Crudwell Primary School.

It is clear there is a lot of local opposition to having a site allocation plan forced on the village. Over a hundred parishioners turned up at the last Area Board meeting to voice their opinion and over £5000 was raised in a fortnight to engage a consultant to put the villages case to an Inspector.

Whilst it is understood that Wiltshire Council needs to ensure an adequate five year housing land supply across each housing market area, the Site Allocations Plan would result in an oversupply of 4,284 dwellings to 2026 when past completions are combined with deliverable commitments, and windfall sites are included. Even when windfalls are excluded, the oversupply is still 2,198 dwellings across the Housing Market Area.

On this basis, there is no strategic need to identify any new homes at Crudwell, so the Wiltshire Site Allocations Plan should not do so. This Parish Council believes that this plan if adopted will set a planning precedent that will be impossible to manage, it being outside the designated red line settlement boundary.

A major concern to Parishioners is the risk of flooding which happens to properties around the Swillbrook which runs through the centre of the village. Significant damage has occurred to many houses in the village in recent years both through surface water and raw sewerage. Surface water from the proposed site would make this situation far worse.  We must not overlook the fact that many properties around the school and(former) post office green as far up the A429 as The Butts  estate already need non-return valves to stay safe from sewerage flooding until the excess over capacity subsides. In addition, sewerage frequently exudes from all the manhole covers around the PO Green in Tuners Lane due to the lack of Pumping Station capacity , even during only moderate rainfall. The Council have been contacted by Hankerton Parish Council expressing their concern over the increase in Sewerage this plan would bring to their own pumping station as it barely copes at present.

In Conclusion Crudwell Parish Council is surprised a Development as large as this is proposed in a small village with a significant conservation area which already has a School which is full, an identified Sewerage and Drainage problem, has no shop and a bus service which at best is poor and is planned to be reduced. We believe the village has the opportunity through its emerging Neighbourhood Plan to define its own future.

This takes our membership to 7 Parish Councillors leaving 2 vacancies, full  details of Councillors and responsibilities is shown on the ‘Our People’ tab.  Further details are available from Lisa the clerk, if you are interested in joining the Parish Council:-

For details of our Councillors please go to the ‘Our People’ page.